As sewage pours into the House of Commons and Uri Geller claims credit, we ask – is this a sign? Or just a burst pipe?

Humility is rising, Theresa’s getting low
According to all sources, she hasn’t long to go
‘Cause tonight for the first time
In the houses of parliament
For the first time in history
The government’s in contempt

from the album SingalongaMay by Half Bam Half Whisky. Listen here. 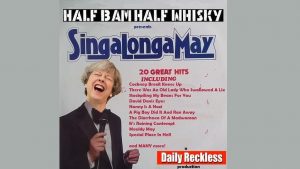 Be the first to comment on "It’s Raining Contempt"

If Burns Was Alive Today

No Particular Thing To Say