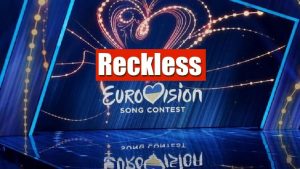 sponsored by The Tripe Marketing Board (@TripeUK)

The Daily Reckless is proud to present the alternative Reckless Eurovision Song Contest.

Based on the imaginary entries conjured up by Alexis Dubus (@AlexisDubus).

ALBANIA
Agnesa Prifti – Give The World Some Lint
– Hip-hop electro opera from the Albanian queen of skiffle.

AUSTRALIA
Dakka Nobson – Didgeridoowop
– Described as a knockabout tribute to the indigenous peoples of Australia, also described by various sources as extraordinarily misjudged on multiple levels.

BELGIUM
Biodegradable Polymer Bertrand – Ça Ne Plane Pas Pour Nous
– Environmentalist band, whose performance is rumoured to conclude with them supergluing themselves to the judges

CROATIA
Tomislav! – Playin’ My Guitar
High-pitched keyboard pop from the former grocer and midwife about the joys of playing the guitar

CYPRUS
Grigorios Psiskeristos – Fuck RyanAir
– Perhaps the most controversial entry this year. A heartfelt rock ballad about making love to a RyanAir plane.

ESTONIA
Rasmus & Oskar – What If I Borrowed Your Parents?
– Irreverent punk-samba from the bad boys of Tallinn

FINLAND
Anders Fitbit – Let’s Go Apeshit
– A hectic little number, said to contain the most words of any Eurovision song in the contest’s history

FRANCE
Jean-Jacques Puissard – Non
– Quite a negative entry from France, selected by the general public as the least likely to win, thereby sparing them the cultural ignominy of having to host the contest themselves

GREECE
Yianis Varoufakis – It’s Monkey Time
– Conceptual pop effort, with every word written by a different member of the public and voted on individually, then pieced together by a 7-year-old

IRELAND
The Pontiffs – Sham Rock
– An ironic entry from the anarchist rockers, who have all undergone plastic surgery to look like Ronan Keating, playing guitars made of frozen Guinness

MALTA
Marcellino Mifsud – My Kind Of Funky
– Malta’s biggest Instagram food blogger, accompanied by only a bass player, explains in great detail exactly what his kind of funky is, and isn’t

NORWAY
Death Crab – Rinky Dinky
– The most political song this year, subtly berating neoliberalism via the medium of Baroque thrash

POLAND
Maria Przybyszewski – How Long?
– Heartfelt yet relatable torch song about waiting for food at a busy cafeteria

ROMANIA
Concizie – This Is The End
– The shortest song in Eurovision history, clocking in at 8 seconds and containing just four words

RUSSIA
Igor Nyestin – Believe In Your Soul
– Another world record, with the lowest notes ever recorded for a Eurovision song

SCOTLAND
Half Bam Half Whisky – Jocko Euro
A unique re-imagining of the Devo classic, Jocko Homo, originally posted in the Daily Reckless in 2008

SLOVENIA
Zvezdana Žitnik – This Is The Time
– Accompanied by 6 drummers and a foghorn, this semi-improvised grime number sees the multi-octave yellow-haired singer informing the audience of the time throughout the song’s duration

The Dark Side Of Marquee Moon